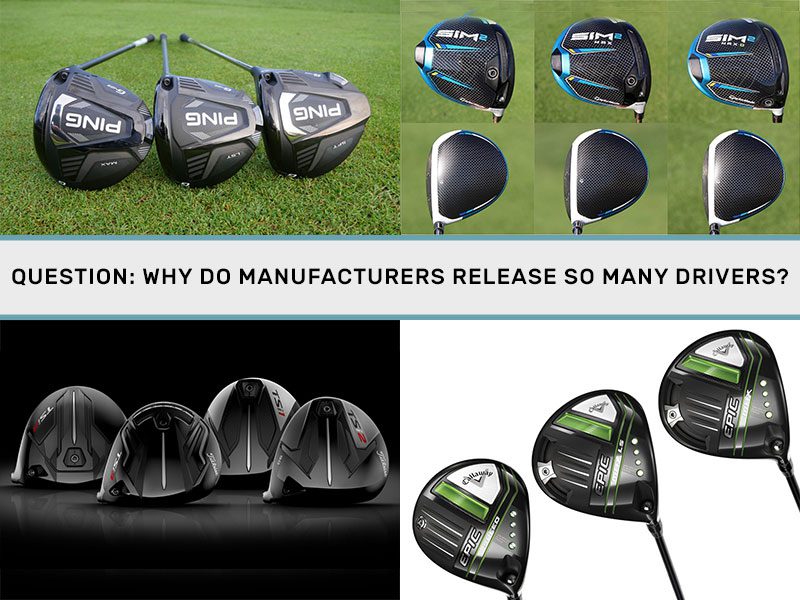 Question: Why do manufacturers release so many drivers?

So you might be asking “why does one manufacturer have to release 4 different drivers in 4 months?” It’s a question that we often get when people take a look at drivers, that’s what we’ll be exploring today.

As specialist custom fitters we see all kinds of varying golf swings and there are a few different options you can look at to get the most out of your driver, and obviously as the part of the club that makes contact with the ball, the clubhead is a vitally important factor in finding yourself a good way down the fairway. This is essentially the reason that you’ll see manufacturers releasing multiple clubheads, to cater to as many golfers with varying swings as possible. If we take the current Titleist line as a case study, the TSi1 was released with the description “For players with moderate swing speeds seeking an ultra-lightweight configuration to help maximise distance.” In comparison the TSi4, at the other end of the spectrum was “For players seeking aggressive spin reduction to improve their driver distance.” Now these two drivers sit at polar opposite ends of the spectrum and do so for a couple of different reasons. The main reason is the centre of gravity (CG), the TSi1 head is very deep and has a weight right at the back of the head, this pulls the CG back, creating more launch and spin, in contrast the weight in the TSi4 is right at the front of the head, this puts the CG way forward and reduces the spin. Now let’s say you hit nicely up on the ball, strike the ball consistently and produce a lot of speed, you’d benefit from something closer to the TSi4 as you’d get reduced spin rates and therefore more distance. However if you struggle to get a lot of height and don’t swing it quite as fast, something with a deeper CG to promote more launch would be a lot easier to use, enter TSi1. Your suitability for drivers will also depend on the size of the head, the maximum size you can get for a driver head is 460cc, this makes the sweet spot larger and reduces the effect of off-centre strikes. Whereas something like the TSi1, with a smaller head of 425cc sacrifices some of that forgiveness that comes with size to reduce spin for players with higher launch and ball speeds.

Manufacturers also know that most of us will be looking to keep control of our ball flight, so most will offer an option with adjustable or fixed weights to give a ‘draw/fade bias’. Taylormade and Ping, for example, both offer drivers in their current line with a fixed draw bias, with a weight locked into the heel that makes the toe lighter, meaning the face is easier to close, reducing the likelihood of slicing the ball. These little adjustments to the weight distribution in the head tend to allow you to put a more natural swing on the ball, without worrying about adjusting your hands mid-swing and risking a miss through over-correcting. As you may have gathered, there are a lot of differing requirements that people find they need out of their driver, so fitting all of the tech and features to fit everyone into one club is impossible. Meaning the only way to cater to every player is releasing multiple heads, giving custom fitters like ourselves more of a chance to find the perfect ball flight once you match it up with the right shaft. These developments in the technology and variety of options give golfers loads of options, so the best way to guarantee that you pick the right one is get it fitted so you’ll be the furthest down the fairway every time. Why do our winter coaching programme’s help golfers progress?